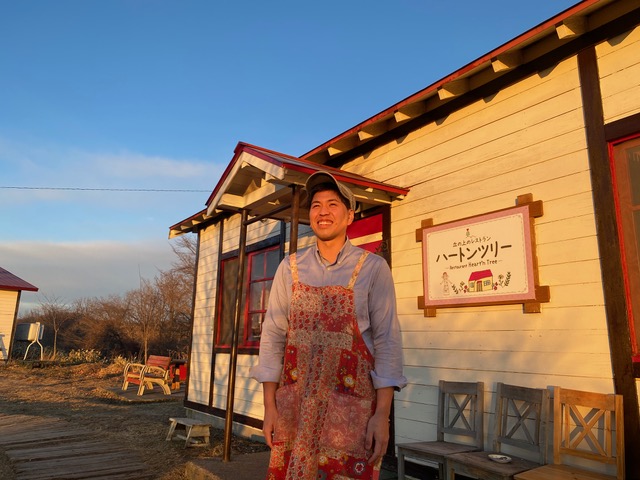 Heart'n Tree
Daichi Hattori
Born in Tsurui Village. He went to high school in Kushiro City, then moved to Osaka to study in a culinary school. He worked for an Italian restaurant in Tokyo for 5 years, before deciding to return to Tsurui. In 2018, he went to Italy to study in a restaurant for several months. He is now the head chef of Heart'n Tree. He is a father of two sons.

Working with the local people to offer rich and delicious food

Daichi Hattori had never held a kitchen knife before he decided to start a career in the culinary arts. He first thought of becoming a chef back in his high school years. He wanted to pursue work immediately after graduating, and he remembered how his mother worked in her own restaurant. After finishing a course in a culinary school, he started working for an old restaurant in Tokyo.

A turning point came when he got married. He wanted to raise a family in the countryside, and the first place that came to his mind was his hometown of Tsurui. He remembered his old home on top of a hill, with a beautiful view of the sunrise and sunset every day, and he realized how lucky he was to have grown up in such an environment. He wanted his children to experience the same luxury, so he decided to move back home with his family.

As a chef, Hattori-san also found attractive the prospect of using the delicious produce of Tsurui in his cuisine, and he now strives to use local ingredients as much as possible. He tries to comes up with recipes that let people recognize the quality of Tsurui’s food products. Adopting the concept of his family’s restaurant Heart’n Tree, he seeks to collaborate with the local producers of Tsurui. For example, he uses deer meat from Miracle Kobo to make roast venison or steak, and he uses the herbs and vegetables grown by local housewives as ingredients in his pizza and pasta.

Hattori-san also strives to reduce food waste by making use of every edible part of an animal or vegetable as much as possible. For example, he makes use of venison bones to make broth, and uses whey, a side product of cheesemaking, as an ingredient in bread and caramel. It is his way of helping preserve the environment.

Hattori-san finds it fun coming up with new culinary ideas together with the local people of Tsurui. He has received many suggestions for new ingredients or dishes, some of which he has incorporated into his cuisine.

He also confesses to having rediscovered the charms of Tsurui since returning home. Besides the village’s extensive social welfare programs, he finds beauty in being able to live a simple, comfortable life. He also enjoys exploring the many secluded shops around the village, and receiving vegetables from friendly local farmers. He believes that this goodwill and kindness between locals is one of the charms of a small village like Tsurui.

When asked about his dream for the future, Hattori-san says that he just wants to continue living his current life, communicating and collaborating with the local people to offer delicious food for every season. He also wants to make Heart’n Tree an even more attractive place where anyone can relax and have fun.