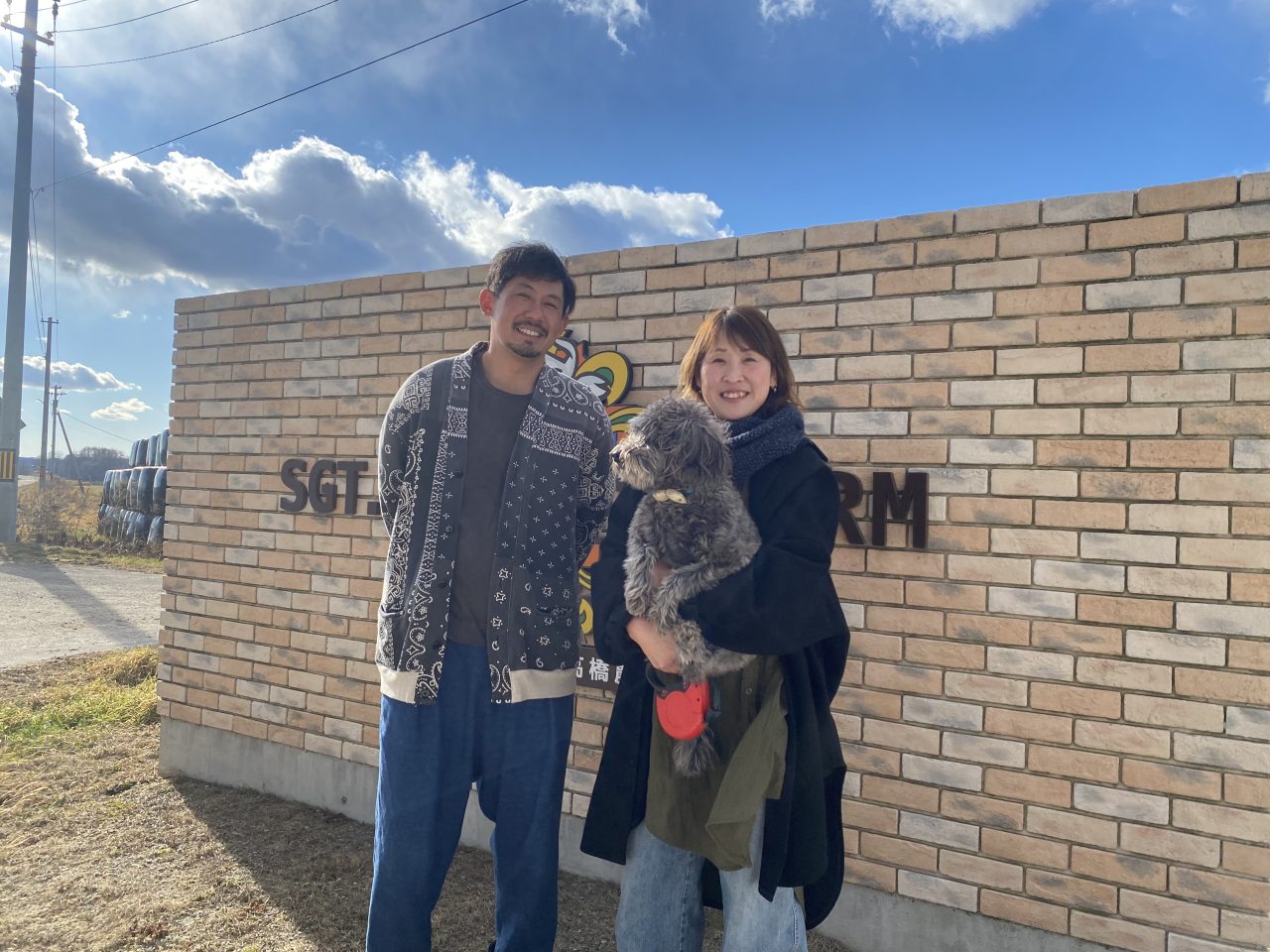 Takahashi Farm (Sgt. Pepper's Farm)
Tomohisa and Sachiyo Takahashi
Tomohisa Takahashi
Born in Tsurui Village to a dairy farming family in a farm that was established by his grandfather's generation. After graduating from the Rakuno Gakuen University, he returned to Tsurui to inherit the family farm. He now serves as the farm president with a dairy farming career of over 23 years.

Sachiyo Takahashi
Born in Kurisawa Town (now part of Iwamizawa City) to a dairy farming family. Becoming a dairy farmer was her childhood dream. After graduating from the Rakuno Gakuen University, she worked at a dairy factory in Ikeda Town before moving to Tsurui to work as a farm helper. She now co-manages Takahashi Farm after marrying Tomohisa.

A comfortable life with support from Tsurui Village

Tomohisa and Sachiyo Takahashi were both born to dairy farming families. As a child, Sachiyo loved cows and often helped take care of them in the farm. In contrast, Tomohisa was actually rather indifferent to dairy farming. But he had a vague notion that he had to someday inherit his family’s farm.

As luck would have it, Sachiyo moved to Tsurui Village to work as a farm helper. The grand scale of dairy farming in Eastern Hokkaido filled her with surprise and ambition. After meeting and marrying Tomohisa, she realized that Tsurui was the ideal place for her to pursue her dreams of becoming a dairy farmer.

Tomohisa also feels the weight of his job. “In the past, Tsurui has been ranked number one in Japan in terms of milk quality, thanks to the invaluable efforts of my predecessors. I want to work hard and live up to their vision and legacy.” Together with Sachiyo, they have adopted some of the latest technology and work practices for dairy farms, but their lifelong love for cows remains deep. Their idea is that if you look out for the safety and comfort of every single cow, they will do their part.

Tomohisa admits that he has been influenced by Sachiyo’s hard but cheerful but work ethic. After seeing Sachiyo’s dedication to joining cattle shows, he has found himself eagerly learning about different ways to raise cattle, despite having little interest in it before. In response, Sachiyo professes her joy at seeing Tomohisa’s diligence. They both strive to become experts in their chosen profession.

The couple finds life in Tsurui to be convenient thanks to the generous support provided to dairy farmers, with dairy being the village’s main industry. Besides the subsidies for dairy farms and the distribution of milk vouchers, Tsurui also has daycare centers that are indispensable for child-rearing families, which include some of the part-time workers in Takahashi Farm.

They are also grateful for the connections they have formed with other villagers. They frequently receive guidance about dairy farming and child-rearing from the older generation. They also try to communicate and share information with the younger generation, but they make it a point not to be forceful. Just as it is in dairy farming, they believe that providing an easygoing environment is important. They want to get new people interested in dairy farming by showing them the joy of the work and the peace of mind it brings.

As Tomohisa and Sachiyo live their dream of a life together with dairy cows, they hope to promote the milk of Tsurui and get more people to drink it, perhaps even one day establishing a local brand of milk.