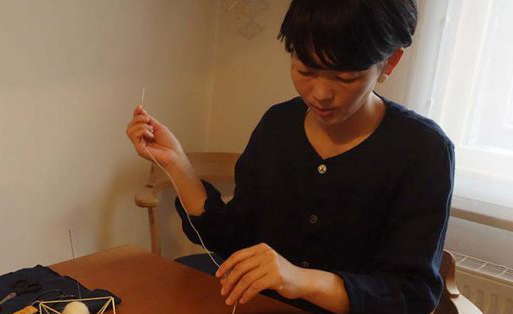 toivoa
Mai Kojima
Born in Saitama Prefecture. She moved to Hokkaido to study in a university in Asahikawa. After graduating, she decided to become a teacher, working in Hamanaka Town and Kushiro City. She then moved permanently to Tsurui Village. She has since retired from her teaching job, and is focusing on raising her daughter and two sons.

Making himmeli with a hope to offer a relaxing time

Himmeli is a traditional Finnish ornament made of rye straw and strings. When Mai Kojima first saw a himmeli hanging as a decoration during a trip to Finland, she was immediately captivated by it. She thought to herself that she wanted to try making it on her own someday.

When Kojima-san moved to Tsurui Village several years ago, she decided to join a group of local women called Herb’n Mage. Some of the group’s activities include growing garden herbs, making cheese, and crafting wreaths. It was during this time that Kojima-san came up with the idea of making himmeli. She had previously felt embarrassed talking about it with others, but with this group, she had finally found people who could share her interest in handicrafts. She surmises that she might never have gotten into himmeli-making had she not moved to Tsurui.

Kojima-san believes that himmeli-making begins from the sowing of rye. Initially, she had wondered about where she could get straw for making himmeli, but she got a suggestion that she should just grow it herself. So she decided to grow rye in the lot around her home. She sows the seeds and harvests and dries the straws after they grow. Though it’s an arduous process, she always enjoyed the time doing it together with her children.

Nowadays, Kojima-san grows the rye in a large field lent by local farmer who had previously joined one of her himmeli-making workshops. This has allowed her to procure a much larger stock of straw.

Kojima-san decided to build a home in Tsurui because she liked the village’s uncontrived pastoral landscape. Cows grazing freely in pastures, rich forests located nearby, and children picking flowers on their way home from school. For her, this kind of life in touch with nature is the ideal life.

Kojima-san is a mother of three, and though raising the children keeps her busy most of the time, she always finds some time every day to quietly admire the himmeli hanging all around her home. Whenever she makes a himmeli, she makes it with a wish to offer a busy someone a relaxing time when they look at it.

When her children grow up and start to lead their own lives, Kojima-san’s living environment may change, but she hopes to be still be able to lead a supple life where she can quietly devote herself to making himmeli.